How Much Do Tour de France Bikes Weigh

ApexBikes is reader-supported. We may earn an affiliate commission when you buy through the links on our site. Learn more.

The Giro d’Italia, the Vuelta a España and Tour de France are the three most prominent races in the world. Of the three, winning the Tour de France is every professional bike riders dream. The Tour de France is the world’s most reputable and arduous race. Taking place every summer, the race consists of 20 professional teams of 9 cyclists each. These expert athletes must complete 21 day long phases over a 23 day period, in which they have to cycle approximately 3500 kilometers. And that too is not just bikers racing over flat terrain. The race is a combination of racing on both flat and mountainous surfaces and time-trial racing. One needs absolute mastery over all three of the aforementioned types of racing in order to come on top of this race. Therefore, it is clear that the Tour de France is a test of pure athletic perseverance. Only the best of the best riders in the world can endure such difficult tasks and come out as winners. The race is held predominantly in France, however, sometimes it does take place in other countries in Europe. It is watched by billions of people around the world, both at the venue and on television or online websites. It is an event loved by many around the globe. The renowned event has produced legendary cyclists such as Eddy Merckx, Bernard Hinault, and Jacques Anquetil. Tour de France is an athletic feat of pure passion and endurance.

Table of Contents show
What makes or breaks the perfect bike?
Who makes the rules?
Rise of innovation
So how much do the Tour de France bikes actually weigh?
Is it time for a change?
Conclusion

What makes or breaks the perfect bike?

However, this incredible race cannot be won with just skill and expertise. One also needs the perfect bicycle for such a demanding competition. Which begs the age-old question, what makes the perfect bicycle for a race such as the Tour de France? Is it the rim type or the rim material? Or is it the hub? Perhaps the answer is not that simple. And perhaps different cyclists prioritize different aspects of their bicycles. Some like to go tubeless with their wheels, some prefer premium carbon rims and some racers like disc wheels. Whatever they prefer, every professional racer admits the universal truth that the weight of your wheels is absolutely crucial to your success in the race. The weight of the wheels influences everything from the biker’s speed to control. That is why so many people prefer lightweight bicycles as they aid in sprinting past the competitors at a lightning-fast speed. And so it should be easy to pick racing bikes now, the lighter the bike the better its performance, right? This could not be more wrong. Yes, lightweight bikes provide superior speed, but the lightest bikes also experience the most air resistance when speeding up. The bike needs to be sturdy enough to fight off the air resistance and also help the rider to maintain his or her control over it. Otherwise, the biker might lose control and fall off the cycle while trying to speed up. The perfect bike’s weight should deliver a mixture of lightweight and stiffness, thus offering optimum performance to the racer.

Who makes the rules?

The Union Cycliste Internationale, based in Switzerland, is the governing body of the sports and competitive cycling world. All rules, regulations, and executive decisions regarding cycling events are determined by the UCI. The UCI also grants racing licenses to professional cyclists and enforces disciplinary rules, such as in matters of doping and drug abuse. They play a significant role in the sport of cycling and maintain order and harmony in the cycling universe. And so as their role states, they decide everything related to cycling which also includes the weight limit of bicycles for the grand Tour de France. The UCI was founded in Paris, France in the year of 1900. In those early years, bicycles were very high in weight. They used to weigh about 40 pounds or approximately 18.1 kilograms. As a matter of fact, a renowned cycling magazine previewed a cycle in the first edition of Tour de France in 1903 that weighed 39.7 pounds or 18 kilograms exactly. A lot has changed since then. Fast forward to the year of 2000, when UCI announced quite a few rules and regulations which included a brand new weight limit for bicycles. The new weight limit was set at 6.8 kilograms which is 14.99 in pounds. Before this was done, contenders for the Tour de France used to reduce their weight excessively in order to make them lightweight and as fast as possible which is quite dangerous. This new weight limit meant that none of the bikes could weigh less than 6.8 kilograms. This rule was executed to make sure that bicycle companies did not manufacture ultrafast bicycles at the cost of disregarding structural integrity. To ensure that the bicycles are engineered to not just win races but also to guarantee the safety of their riders. Thus, establishing a new standard weight limit which ensured protection for the riders and made their bikes less fragile.

As for how the UCI came to the decision about the weight limit, the UCI has a notable Equipment Commission which consists of engineers and other bicycle specialists who have worked in the industry for many years and have a great experience. They have researched and reviewed numerous data on the reliability of bicycles. Then after careful consideration, they have collectively come to the decision of an international weight limit of 6.8 kilograms.

This weight limit forced bicycle manufacturers to make bicycles that satisfied UCI rules and also ensured speed for the racers. However, the birth of the use of carbon fiber technology in modern-day bicycles made this an even harder job for the manufacturers. Now, carbon materials are used on almost every component of the bicycle. Rims, bike seats, hubs, you name it, they all can be made from carbon. This led to Tour de France and other grand race contenders to take these superlight bicycles and add back-dated components such as alloy handlebars in order to meet the weight limit.

When the weight limit was first set in 2000, it received a lot of backlash from racers and the general public. Everyone thought professional bicycle racing was getting restricted. However, as time passed by we saw that it actually made way for innovation and ultimately transformation in the sports cycling arena. Manufacturers also met the weight level with the invention of electronic shifting. The electronic shifting got rid of traditional shifting which consisted of inconvenient cords. This new system moved the chain with a tiny motor powered by batteries. Another innovation due to the weight restriction is the shape of the bike as a whole. The bicycle industry focused more on making the bike and its components more aerodynamic in shape. Although the UCI has regulations in place to stop racers from making their bikes too aero in shape. Manufacturers have found ways to make racing cycles aerodynamic enough to both meet the regulations and also provide maximum speed and efficiency to the professional cyclists.

So how much do the Tour de France bikes actually weigh?

The governing body could not predict this rapid development in the bicycle industry. We can clearly see the result of such innovative thinking out there on the track today. Trek’s Edmonda 10 weighs just 4.6 kilograms (10.1 pounds) which is exactly 2.2 kilograms below the weight limit. Not only that, but the 4.5 Merida Sculptura 9000 LTD is also known as one of the lightest bikes out there. With such advanced technology available today, bikes can be both super light and safe at the same time. Racers use such bikes by adding extra weight in order to get them approved for professional competitions under the UCI.

Here are some of the bikes and their weights, the Tour de France professionals have used:

Is it time for a change?

Yes, the weight makes every race a fair competition. Yes, it was made to ensure safety and it has given way to innovations such as electrical shifting and aerodynamics. But with the progress in technology, materials and engineering is it still necessary? Many racers and manufacturers of the cycling world don’t seem to think so. Engineers from Scott Sports have expressed that with modern technology at our fingertips, the weight limit does not ensure safety. According to them, a bike weighing above 7 kilograms can be more dangerous than a bike weighing below 6 kg made with the latest materials. And for some, the very fact that racers take bikes weighing less than 6.8 kilograms and add weights just to make them viable for the race track is absolutely irrational. The way science and technology are progressing every day, maybe it is time to revisit this topic. 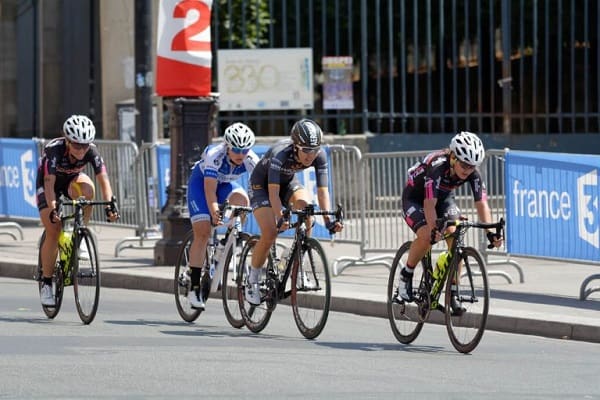 In order for the UCI to change the existing weight rule, the Equipments Commission must find enough scientific proof that indeed altering or deleting the rule will not hamper the safety of bicycle racers around the world. No matter what the limit is set to, racers and companies will continue to push the boundaries of bicycle manufacturing and take them to the next level.

We hope that we have been able to provide you with the information that you were looking for. We have tried to include as much as we can about how much Tour de France bikes weigh, why they weigh that much, what is the current scenario, and what the future may look like. We tried to paint you a picture of both sides of the story on the UCI weight limit. Whether the rule should be altered or eliminated is up to you to judge and ultimately up to the Union Cycliste Internationale to decide.

Whether the rule is here to stay or leave, it does not change the fact that we are producing the best cycles right now than ever before. The products out there today are absolutely incredible. And this was all possible because the weight limit coerced bicycle companies and its engineers to find new ways to enhance performance and speed.

Thus, driving the entire industry towards what it is today. So let us hope that this innovation continues and further develops the cycling world that we know today.

My name is Dion Lewis.I’ve been cycling since my childhood. When I was in high school, I started racing in our local competitions.In my college life, I took a part-time job in a bicycle shop and I learned how to repair and maintain bicycles professionally.Though I love racing, mountain biking is another thing I do frequently. My friends, neighbors, and colleagues treat me as an avid rider and take my suggestions while they plan for a new bike or bike gear.

This site contains affiliate links, meaning we may get a commission if you make a purchase through our links, at no extra cost to you. As an Amazon Associate I earn from qualifying purchases.